This painting is called “The Coronation of the Virgin” created by Annibale Carracci. This painting was dated after 1595 and can be found in gallery 623. According to some of the information from the label, Annibale Carracci, together with Caravaggio, was the most influential painter of the seventeenth century and the main figure in the development of classicism. This picture was painted for Cardinal Pietro Aldobrandini (1571–1621), shortly after Annibale’s arrival in Rome in 1595. In it, Annibale brought together two currents of Italian painting: a north Italian sensitivity to the effects of natural light and color, and the spatial organization and idealized figures associated with the Renaissance. Raphael’s frescoes in the Vatican inspired the composition, while the figure of God the Father was based on an ancient Roman sculpture. I saw this painting while visiting the Metropolitan Museum.

I saw many amazing paintings at the MET and this one stood out to me because it is a Baroque painting and also because it looks very complex and it took a lot of effort to make the painting look three dimensional. The story said that after Annibale got to Rome, she used the effects of light and color and idealized figures in her painting. The figure of god in this painting was based off of Roman sculpture. Especially because it is an oil on canvas painting. When I looked up the story behind this painting, it reminded me of something we read and discussion about  in Classics class. Along with the discussion of God and Roman Sculptures. 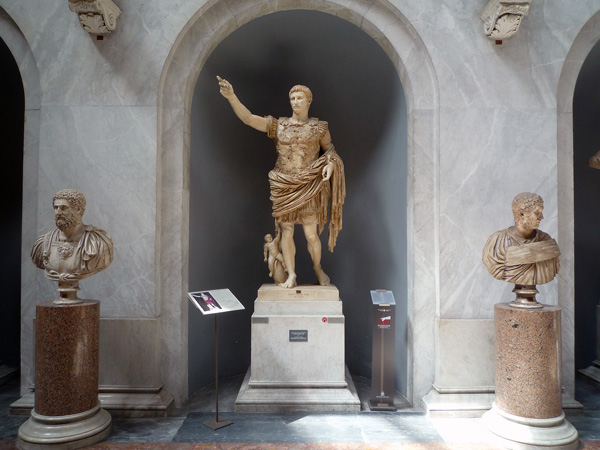 Throughout the readings, we learn a lot about who he is and his characteristics.

“He argued that ‘Augustus‘ was both a more original and a more honorable title, since sanctuaries and all places consecrated by the augurs are known as ‘august‘” (Life of Augustus 7).

“I drove the men who slaughtered my father into exile with a legal order, punishing their crime, and afterwards, when they waged war on the state, I conquered them in two battles” (RES GESTAE 2)

These two quotes displays how people honored Augustus and Augustus’s actions. People feel that his name is empowering and respected while he gets revenge to the people who slaughtered his father. I chose these quotes because they both display to the reader they type of person Augustus is. One is what others characterized him as while the other is what the reader takes away about his actions. Both quotes are similar in that they both use specific wording to fully characterize Augustus. In the first quote, the terms original and honorable are being used to characterize Augustus while in the second quote it uses the terms punish and conquer.

This is a picture of me holding a calendar opened up to the month of August. The month of August is named after Augustus. Augustus completed the calendar and named the month after himself. This relates to the reading in a way because Augustus is known for conquering therefore him naming a month after himself shows power and honor as discussed  in the previous quotes.

This is a Sarcophagus with scenes from the Lives of Saint Peter and Christ located in the Metropolitan Museum of Art going back to the early 4th century of the Roman Culture.I found this interesting because  it relates to the Sarcophagus of Junius Bassus.

This carving shows scenes from the life of Christ. This was carved about the same time Christianity was spreading in the Roman Empire, similar to the Sarcophagus of Junius Bassus. There are two scenes of Saint Peter’s arrest in Rome and the miracle of drawing water from a rock performed in his jail cell. On the Sarcophagus of Junius Bassus, there are some scenes from the Bible. Christ is looking naturalistic and showing movement. Also, Christ is in the middle and looks very young with a scroll in his hand.

This relates to Classics class where we discussed about syncretism, the merging of two different cultures, which is depicted here with the sarcophagus connecting Christianity and the old Roman polytheistic traditions.

Both are similar in that they were carved around the time when Christianity was first recognized as a legal faith in the Roman Empire but, the Sarcophagus of Junius Bassus is different as it connects classical and early christian art. With the capitals and columns, and Christ being situated above the river gods, the sarcophagus shows Christianity conquering old polytheistic traditions of the Ancient Romans which organizes and creates the new religion into its empire.

The show Save me a Seat is about a boy named Ravi- a short Indian boy who is fresh to America. He goes through many difficult obstacles such as his teachers not being able to pronounce his name, nobody understands him and people judge him because of his vegetarian lunch he brings with him to school. Through his 5th grade experience, he felt like an outcast. This show is divided into 5 which are each day of the week from Monday- Friday. The center piece of the show is social habits on food and how cultures can be identifies based on their foods they eat.

An issue in our current society is that many tend to immediately judge a person based on their appearance or an action they make. This is a major issue because nobody knows exactly who a person is just because they dress differently or because they eat a different type of food. Nobody is perfect in this world therefore we cant always expect anything to be perfect or right. Everyone is special in their own way and we must all accept that in ourselves and others regardless of race, culture, gender or religion.

This issue can be compared to the story of Medea. In the story, her husband Jason marries another woman named Glauke. The reader automatically judges this woman as a negative figure because she is the one Jason went for because of her power. Just based off the story of Medea, we don’t know much about Glauke. Many may judge Glauke as a negative figure because she has power and many compare power as something that bring evil. But in history there have been great powerful people.

In class, we discussed the story of Medea and nobody seemed to say anything about Glauke. Although she isn’t very relevant in the story, we shouldn’t think of her as a bad figure. Therefore, the story of Medea and the show Save Me A Seat go hand in hand on the issue of judging people before knowing who they really are.

Garfield, the fat orange cat known for his smart mouth, laziness, arrogance and love for food, who lives with his owner Jon. Jon decides to expand his family by bringing in a dog named Odie who is lovable but Garfield despises because Garfield feels that Jon is giving Odie more attention than him. This was very difficult for Garfield therefore he decides to kick Odie out of the house which resulted in Odie going missing and ending up in the wrong hands. Garfield then realized what he has done and decides to rescue Odie. Feeling alone and lonely is a major issue in society today. Many people who experience these feelings can feel as if nobody cares for them or a sense of betrayal. However, that doesn’t give the right to pass on the negative message to other peoples lives. How should we react to difficult situations in our lives?

Medea felt betrayed by her husband Jason as he married King Creon’s daughter to gain power. Medea is put in a tough situation where she is furious and wants revenge. This anger resulted in her killing her own children, King Creon and his daughter by poisoning them. She did not kill Jason as she left him to witness everything he has lost and what he has caused. The end result of this entire situation are multiple deaths from a single decision of an individual. Jason left it upon himself to make the selfish decision and therefore has to face the consequences due to his actions to gain a bigger image for himself.

Medea had a feeling of betrayal and felt the urgency to commit an action to seek revenge. Although many emotions arise at certain situations, one must always collect themselves and not pass on the negativity to others because that only makes matters worse and consequences will be faced. This relates to Garfield as he felt betrayed and lonely. His emotions caught to him and took out his anger on Odie. That resulted in a negative setting for Odie which was scary and dangerous. There was then a sense of regret that went through Garfield after he realized what he has done. As a result, Garfield now appreciates Odie’s presence and now is more responsible as he learned from his mistakes.