This painting belongs to the Baroque period. It stands out for its theatrical characteristics, the use of colors and light. The painting represents a Roman legend where the men of Rome committed a massive kidnapping of young women from other cities in the region.

Quote: ”The joyful peace, which put an abrupt close to such a deplorable war, made the Sabine women still dearer to their husbands and fathers, and most of all to Romulus himself.”

The quote of the reading differs with the painting because the painting represents the precise moment in which the attack was being committed, while the quote talks about the moment in which the war was over and the consequences that it brought. It is said that women were more valued by their male relatives after what happened. Finally in the painting you can see how the artist represents the violence of the act. On the other hand the quote talks about peace and a moment of tranquility after the event ended. 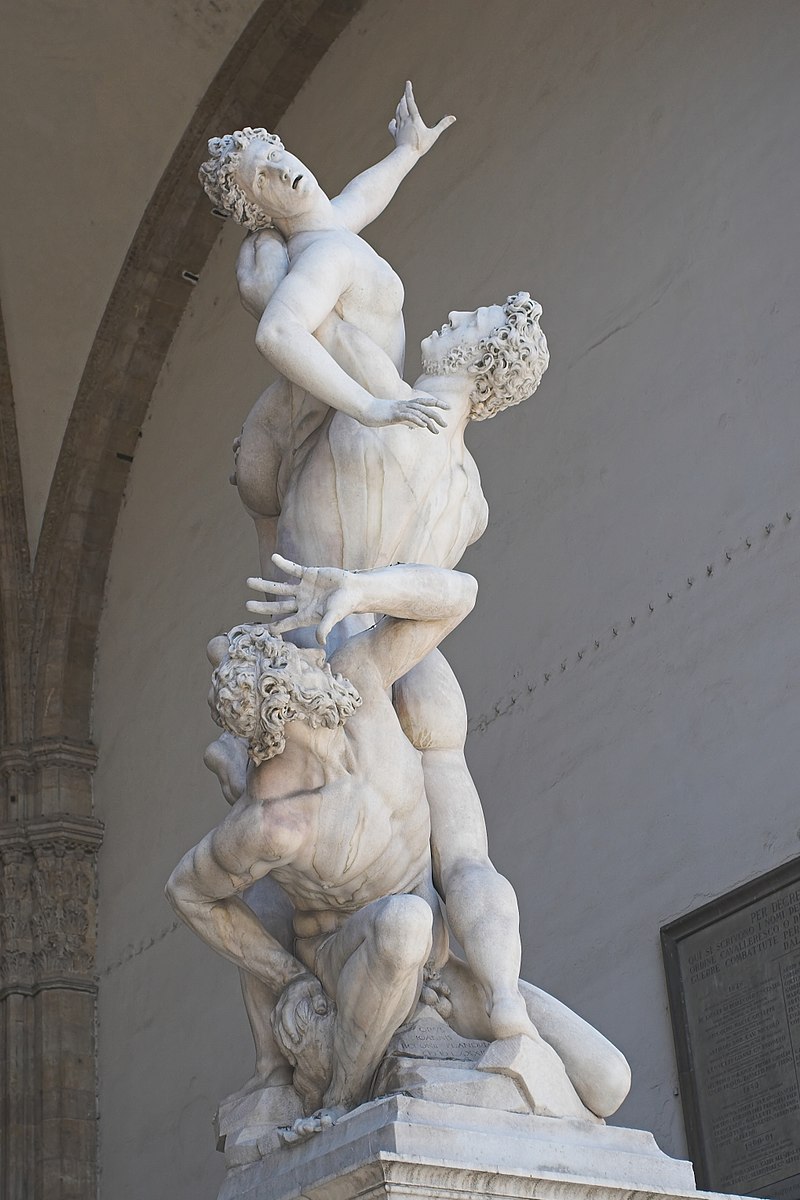 Rape of the Sabine Women

Description of Image: This sculpture appears to be made of marble. The main subject of the sculpture is the young woman who looks to be in distress. The sculptor brings out eyes up to her through the use of the two other figures who are looking up at her. The man on the very bottom is very muscular, even more so than the one above him. All thee subjects are expressing vivid emotion, though their facial expressions and the movements of their limbs. The woman is pushing away the young man holding her, appearing to cry out for help. The man crouching in the bottom also appears to be horrified by what he is seeing, using his left hand to cover his eyes and the rest of his body to push away. The young man in the middle stands tall and strong, holding the woman in his tight grip, despite her protest and appears oblivious to the man crouching at his feet.

Quote: “At a given signal, the Roman youths rushed in every direction to seize the unmarried women.” (Livy Book 1)

Similarities: Both the text and sculpture depict the same image: a woman being taken without her will. The woman in the sculpture looks surprised, her mouth agape, as the man ambushes her. She pushes against him to try to get away, but the Roman man persists; he needs a wife to have children to carry on the newly enriched Roman Empire.  Both the text and image show the kidnapping of neighboring women but the sculpture has one deviation. The man crouching at the bottom is not per-taking in the kidnapping of the maiden. In fact, he looks at the act in horror. The question of “why?” is raised here: he too, is a man so why isn’t he kidnapping a woman to be his wife as well?  My guess is that he is the woman’s father, imploring the Roman youth not to kidnap his daughter.